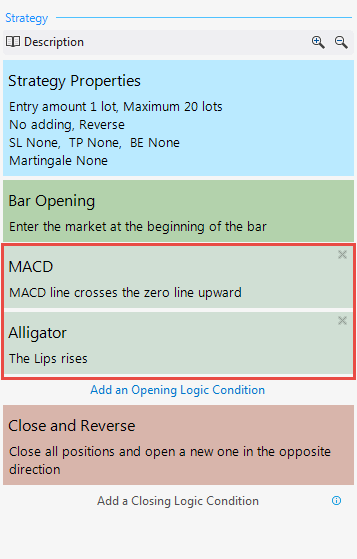 Opening Logic Conditions (Opening Conditions) can be found in the slots below the Opening Point of the Position slot and above the Closing Point of the Position slot. By clicking on the Add an Opening Logic Condition button you can add technical indicators to your trading strategy for fine-tuning the logic of the trading algorithm. By default you can't set more than eight Opening Logic Conditions. The logic is checked separately for long and short positions and can either be fulfilled or not fulfilled. It is possible that the condition is fulfilled for a short position, and not fulfilled for a long one. With some indicators, it is possible that the logic condition is fulfilled in both trade directions at the same time (ADX).

The purpose of the Opening Conditions is to allow a market entry and provide a trading direction. An order is allowed only if all open logic conditions in the strategy are met.

If the strategy does not include Opening Conditions, or if they are fulfilled for both directions of trade at the same time, the direction for opening a position cannot be determined and no order will be executed.

It is important to know that the Opening Conditions, you set, determine the long entry rules and the software calculates the short entry rules using the same indicators but in reverse. You can still use strategies trading in only one direction but you will need to use the Long or Short indicator.

With this strategy, entry orders will be sent at the price of Moving Average when both entry conditions are met at the same time, namely, the day of week is either Tuesday or Wednesday and ADX changes its direction upwards. A drawback with this strategy is the fact that both logic conditions are met for a short and for a long position at the same time. Thus, the program will send two entry orders - to open a long position and to open a short one, too.

To solve the strategy's problem you need to add another Opening Condition that will specify the direction of entry: 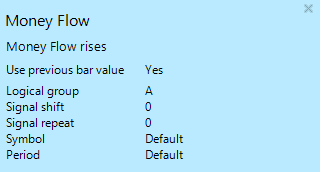 In that case, a position will be opened when the three logic conditions are met at the same time. The third condition will determine the direction of the position: