The Exit Rules are responsible for closing positions. There are only three possible points for closing a position: at Stop Loss, at Take Profit and at Bar Open. Since the Stop Loss and Take Profit are part of the Expert Properties here we will describe only the Bar Open case.

When you create a new strategy it will contain no Exit rules and that is a perfectly valid exit condition. If there are no Exit rules the strategy will close all positions at the next Bar Open. This is indicated by the text “Close a long position at Bar Open”. This means that if the EA opens a position it will close it at the beginning of the next bar. This rule covers both long and short positions.

You can add Exit Rules indicators by using the + Add a new exit rule button at the bottom of the Exit Rules list. The maximum number of Exit rules permitted is 2, after which the button becomes inactive, when this limit is reached. When you click the button, the program opens an Exit Rule Indicator panel at the left side of the Editor. There you can choose an indicator and set its Logical condition and parameters.

All of the indicators have a Logical condition that can either be fulfilled or not fulfilled. When you create a strategy you should set the Long trading rules and the program will mirror the long rules for the short trades as well. In other words the strategy uses symmetrical conditions for long and short positions. The general rule of thumb is that the condition is fulfilled for a short position but not for a long one or vice versa. In some cases, the condition can be fulfilled in both directions of trade at the same time (when using ADX for example). 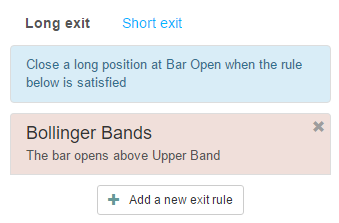 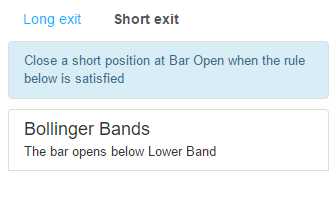 The example above shows one Exit Rule indicator – Bollinger Bands, with a logical rule: “The bar opens above Upper Band”.

The condition “The bar opens above Upper Band” can be either true or false. If you have an open long position and a situation occurs where that the current bar opens above the upper Bollinger band, the strategy will close that position at Bar Open with a market order.

Let's now imagine that we have a short position and the bar also opens above the Upper band. The rule in the indicator slot is satisfied for a long position, but it is not satisfied for a short one because your rule for short positions follows the opposite logic. If we have to put it explicitly: close short when “The bar opens below the Lower Band”. Because we are short and the exit rule doesn't allow closing short positions, the program leaves the position open for the next bar.

When there are multiple Exit Rules, the program closes a position at Bar Open when at least one of these rules is satisfied. This is a key difference between the Entry Rules and the Exit Rules. The program is very sensitive when it decides to close a position. Regardless of how many exit rules we have, just one of them is enough to close the position. Of course, if both conditions are fulfilled the position is also closed. 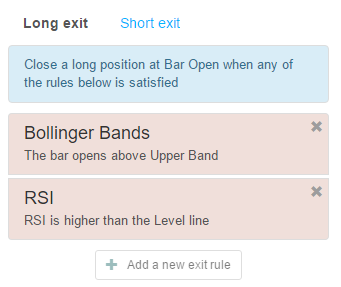 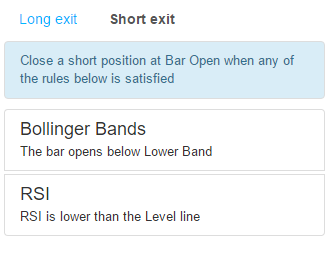