I have a small present for you today - Balance line stability metric in EA Studio.

It is a round number between 0 and 100. The greater the Balance line stability, the better.

Anyway, every value above 90 is good. 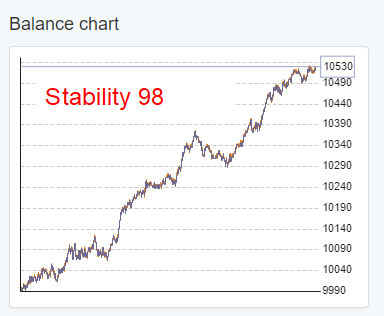 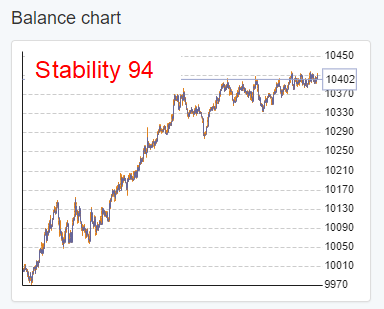 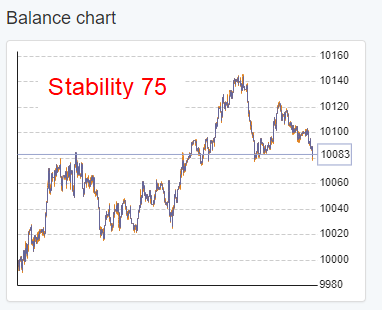 The Balance line stability is shown at the Report -> Backtest Output table.

It is also available as a sorting method in the Collection sorting and also as an Acceptance Criteria. 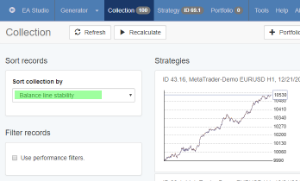 Please reload EA Studio to have the new option.

Using Balance Line Stability as filter will help a lot, the generator to filter a very stable and "perfect" equity curve,
thank's again for listening ours suggestions.

1. It calculates a virtual straight line between the initial and the final balance. It represents the "ideal" stability.
2. It finds the correlation between the Balance curve and the virtual line. It is a number between 0 and 1, where 1 means a perfect overlap.
3. It scales the "representative" part of the correlation in order to make it easier for the human understanding. The scaling formula is:

Wow!
That was a quick answer :-D
Have a great christmas holiday and a happy new year!

A great idea! I'll add to my ToDo.

Thanks for adding this Popov, great to finally have it in EA Studio :-) Merry X-mas!

I just did a few tests with the new metric, and somehow it seems it is too "rounded" or limited (gives to similar values for strategies that have clearly have a pretty different equity curve). Look at the 3 equity lines in these 3 screenshots. For all of them, EA Studio gives a stability value of 99, but the equity curves are pretty different actually as you can see, they can´t all be 99 as 2 of them are clearly far away from a straight line. I´ve added the ideal straight line in RED to make it more clear what I mean. For the first strategy, I completely agree that it almost is a straight line, so the "99" EA Studio shows make sense. However, both other strategies are FAR away from following the straight red line, yet EA Studio also shows them as having "99", which doesn´t make much sense. I´ve re-created all 3 strategies in SQ 3 and SQX and looked at the stability values I am getting there. Strategy 1, of course, has a 0.98 for "Stability", but the other 2 strategies are in the 0.8 area only there, and that is correct, because, as we can see, they do not follow a straight line at all like strategy #1 does.

Can you please turn off the "rounding" (or whatever it is that causes this) or adjust the formula so that strategies like in screenshot 2 and 3 won´t get "99" as well but are in the ~80 area? The metric doesn´t have much use if all 3 strategies get a "99" like if all 3 of them would follow a straight equity line, which clearly is not the case for strategy #2 and #3. Thanks so much :-) 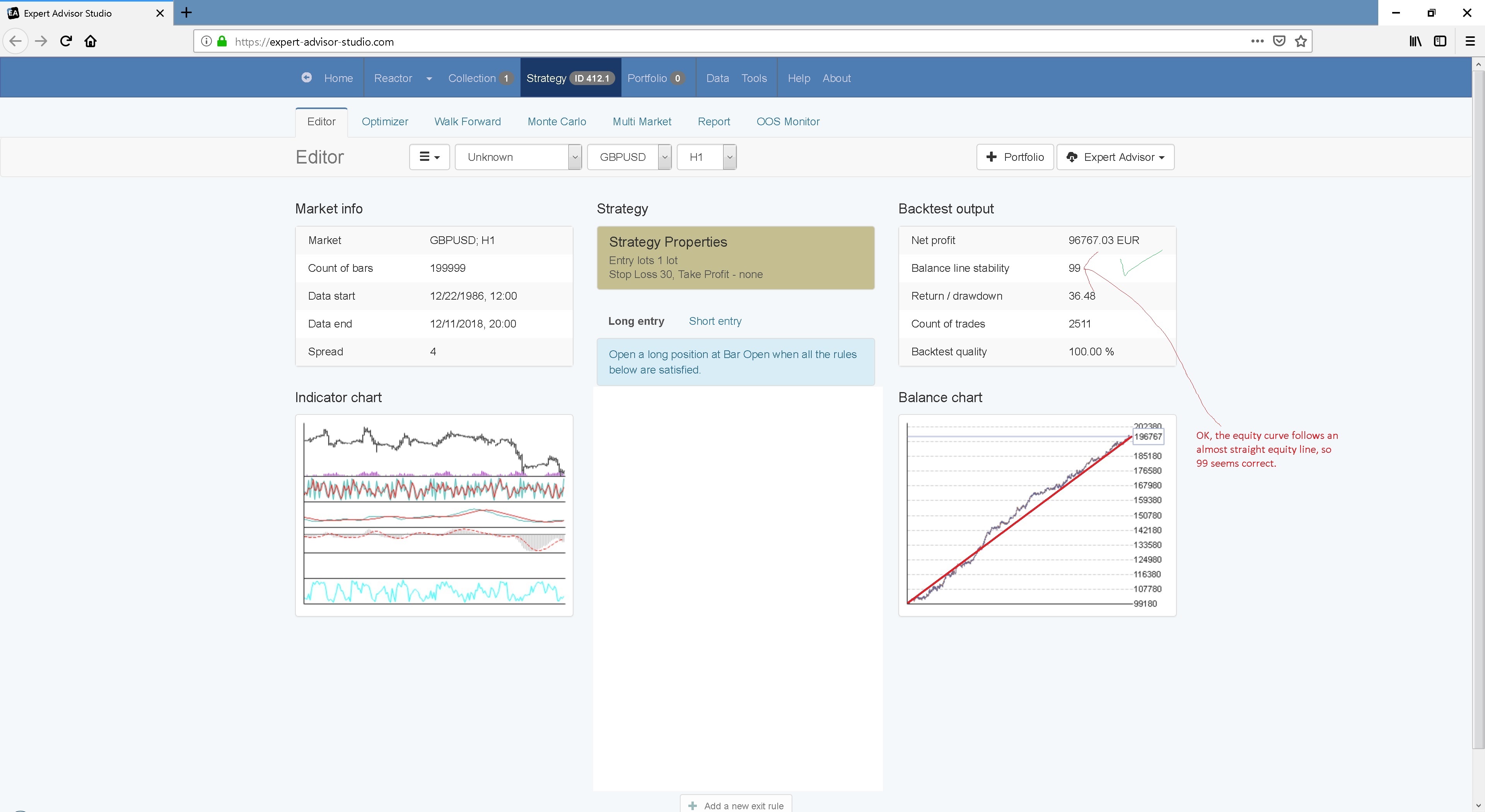 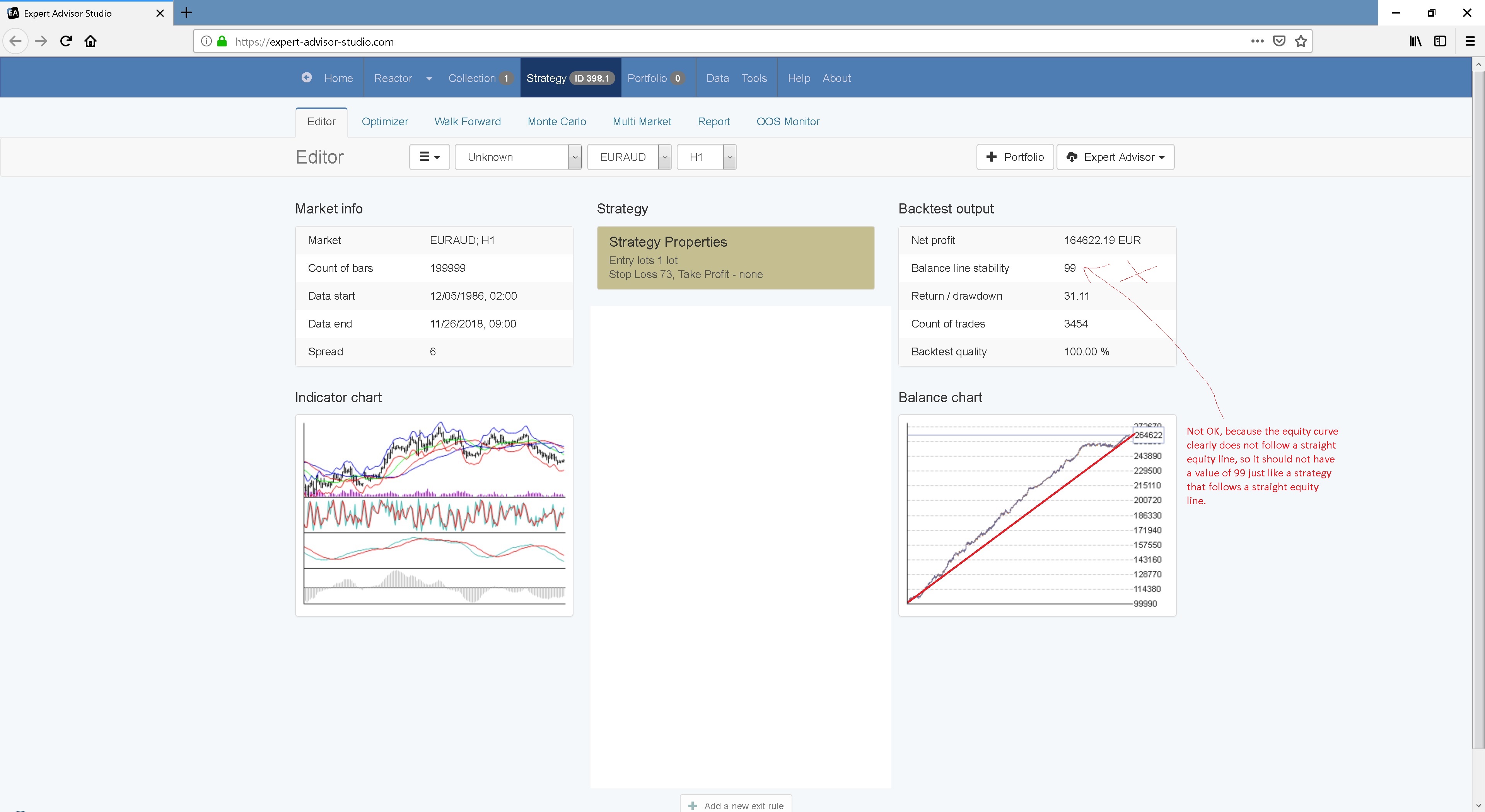 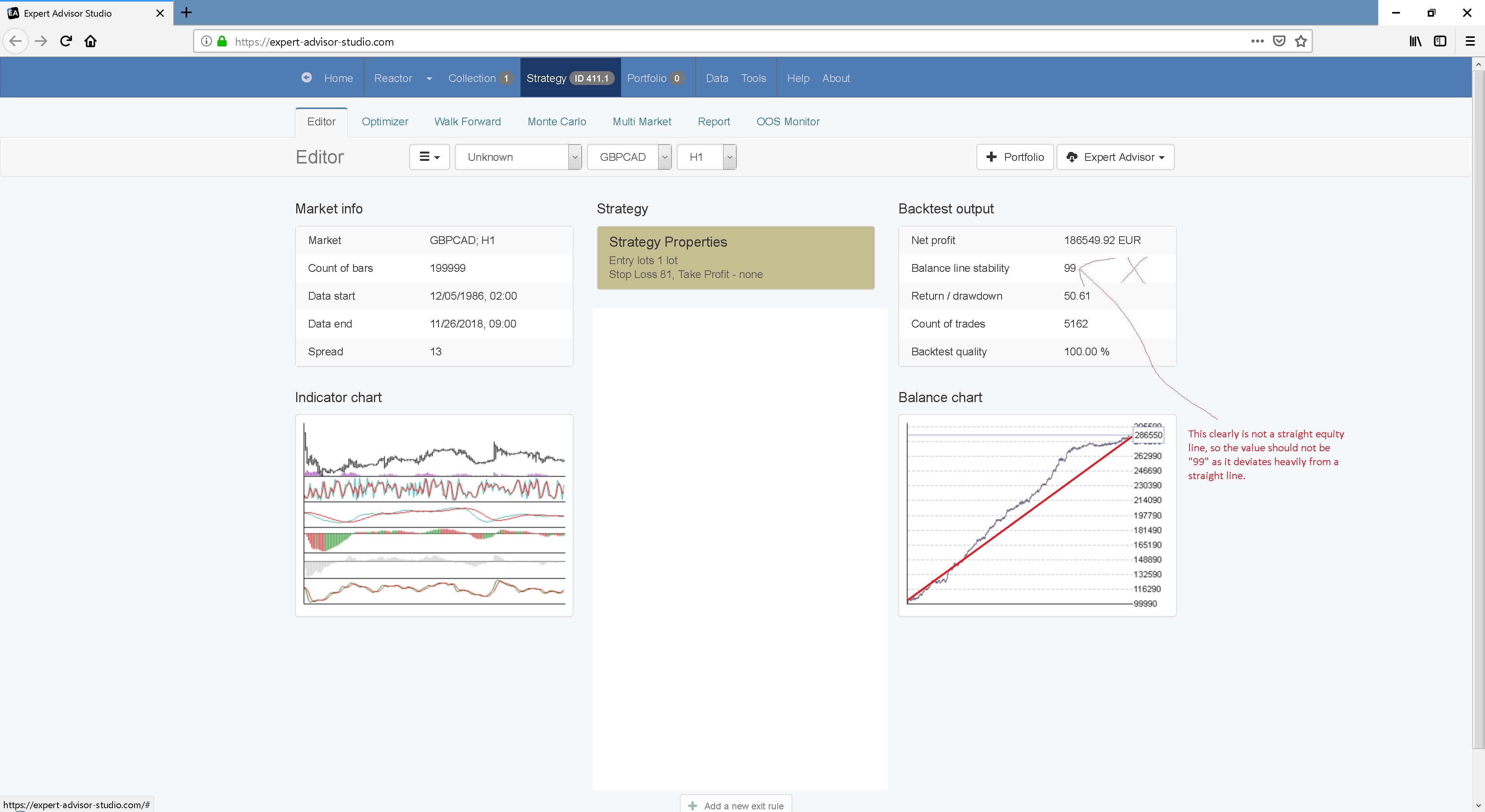 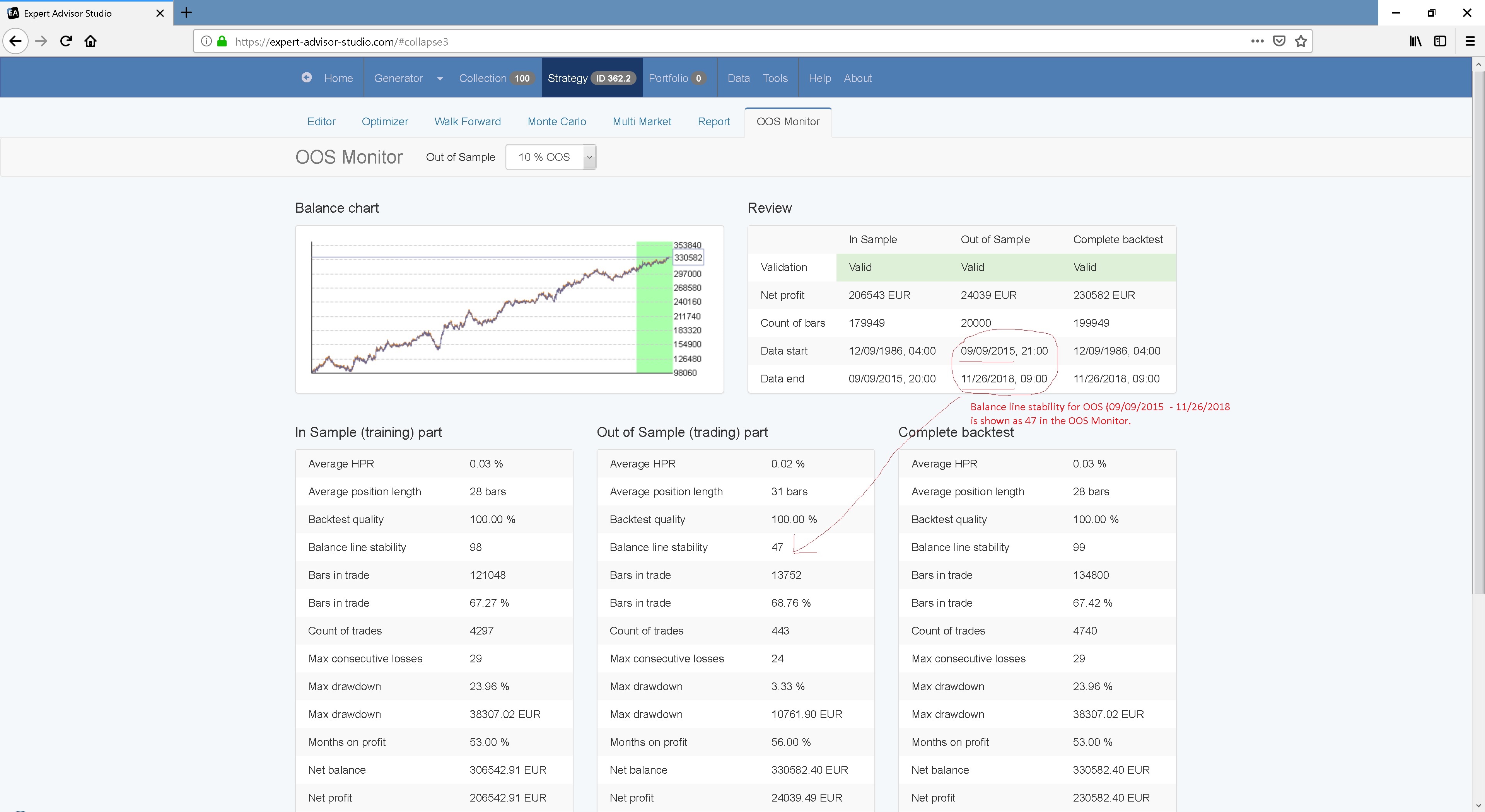 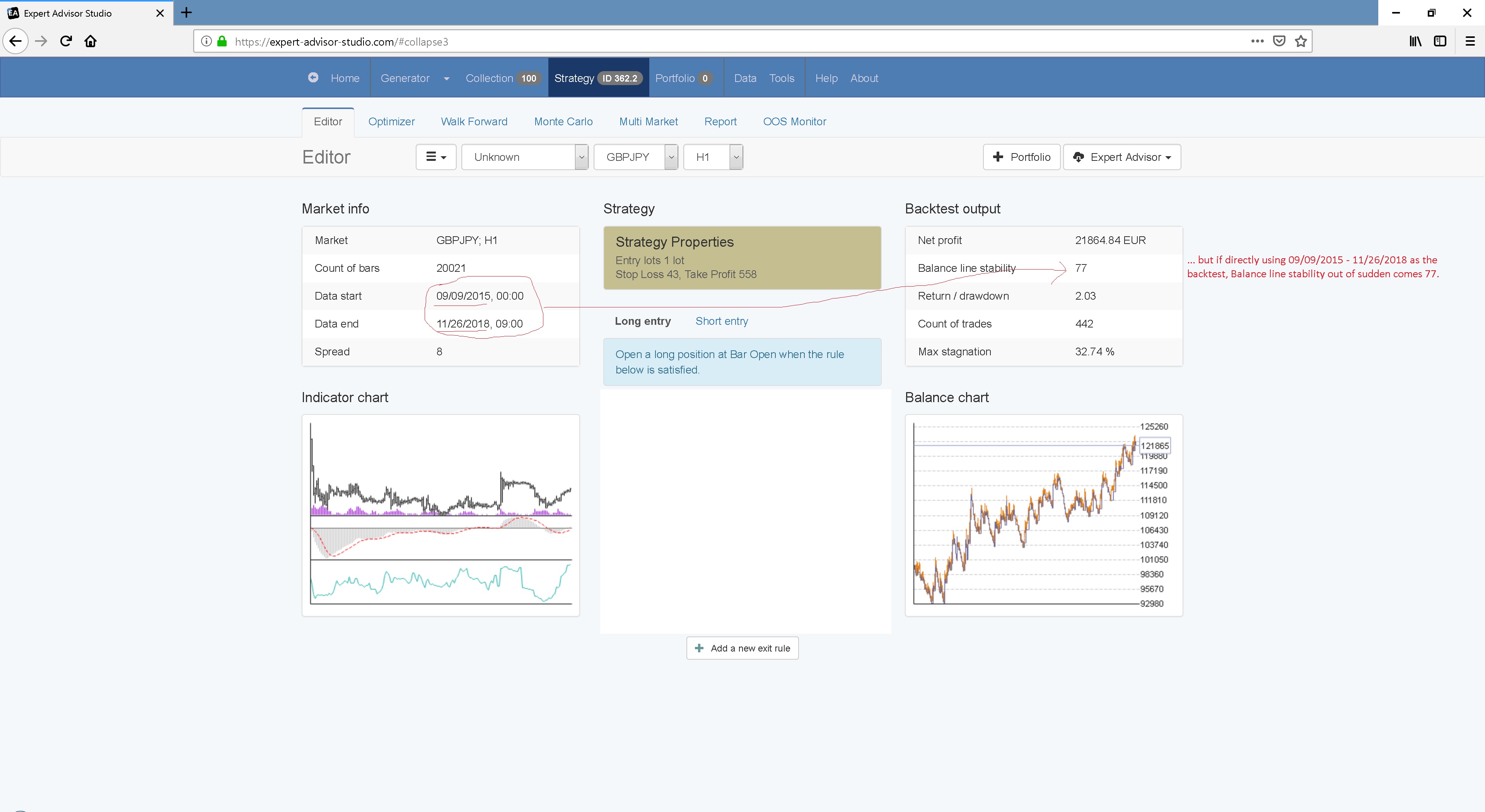 Great, thanks, but which problem you mean? My first post or my second post with the OOS?

Both issues were coming from wrong counting of the control points. Now this is fixed and the formula must work better. Of course, there is a room for improvement.

Great, I will test this, thank you very much :-)

The "OOS" <-> "same data range in a normal backtest" is fixed, great! But I still think the formula has an issue somewhere. Look at this one, for example, it´s all correct that this has a "99.80", as it equals almost a straight line: 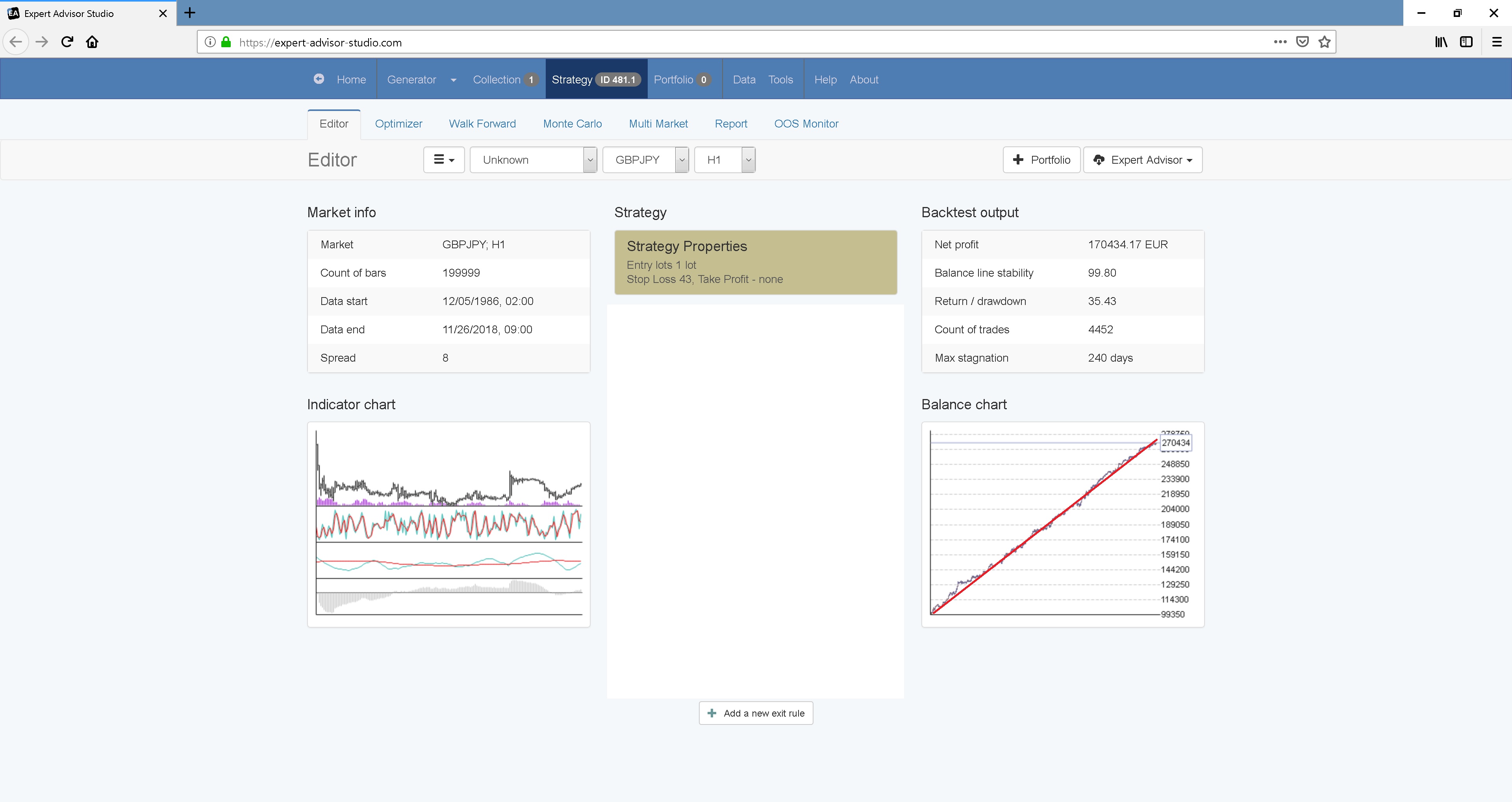 But how can this one have a "98.39", given that it is FAR away from a straight line? If re-creating this strategy in SQX, I get a ~85 value, which seems more logically, as "98.39" would mean it is ALMOST an ideal straight line, but as we can see, it is nowhere following a straight line, so that "98.39" is clearly not right: 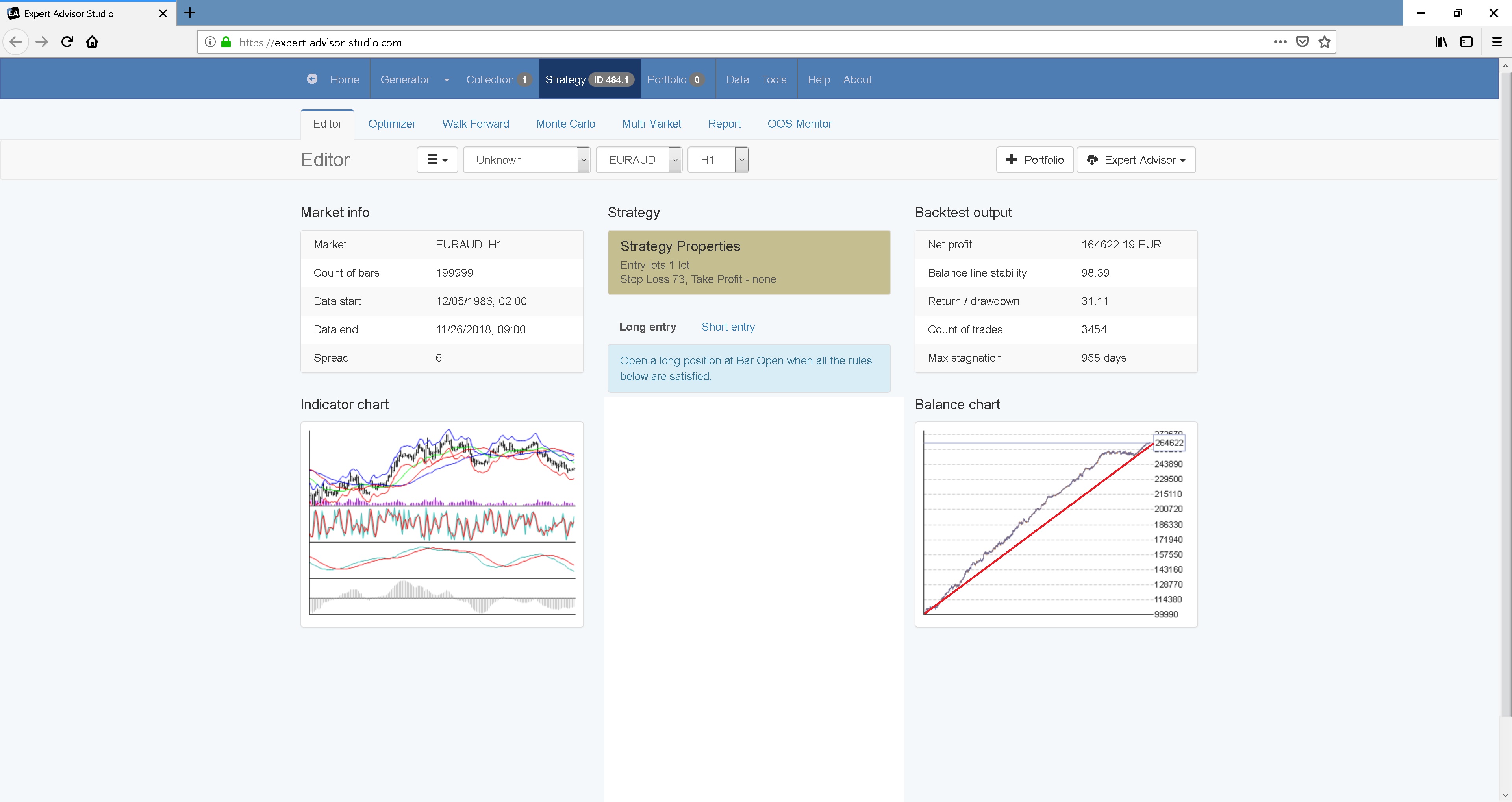 One idea why this might happen: could it be that your formula is putting more weight on the first part of the backtest? Because there the line was almost straight, but then it had a long flat-period, and it seems like your formula is not equally weighting this for the calculation. It´s like if it puts more emphasis on the first half of the trades and if that line has been straight, a later flat period does not influence the value much anymore. It seems to me that if the heavy deviation / flat period is earlier in the backtest, the score gets a lot lower, just like it is not weighing all trades equally. Just a thought...

P.S.: Here is an even more drastic example that something is wrong in the calculation (or the calculation is right, but the way it´s implemented is flawed). How can this strategy have an stability of 96.47? 96.47 should mean that we have an almost perfect straight line, but this equity line is far from following the straight red line: 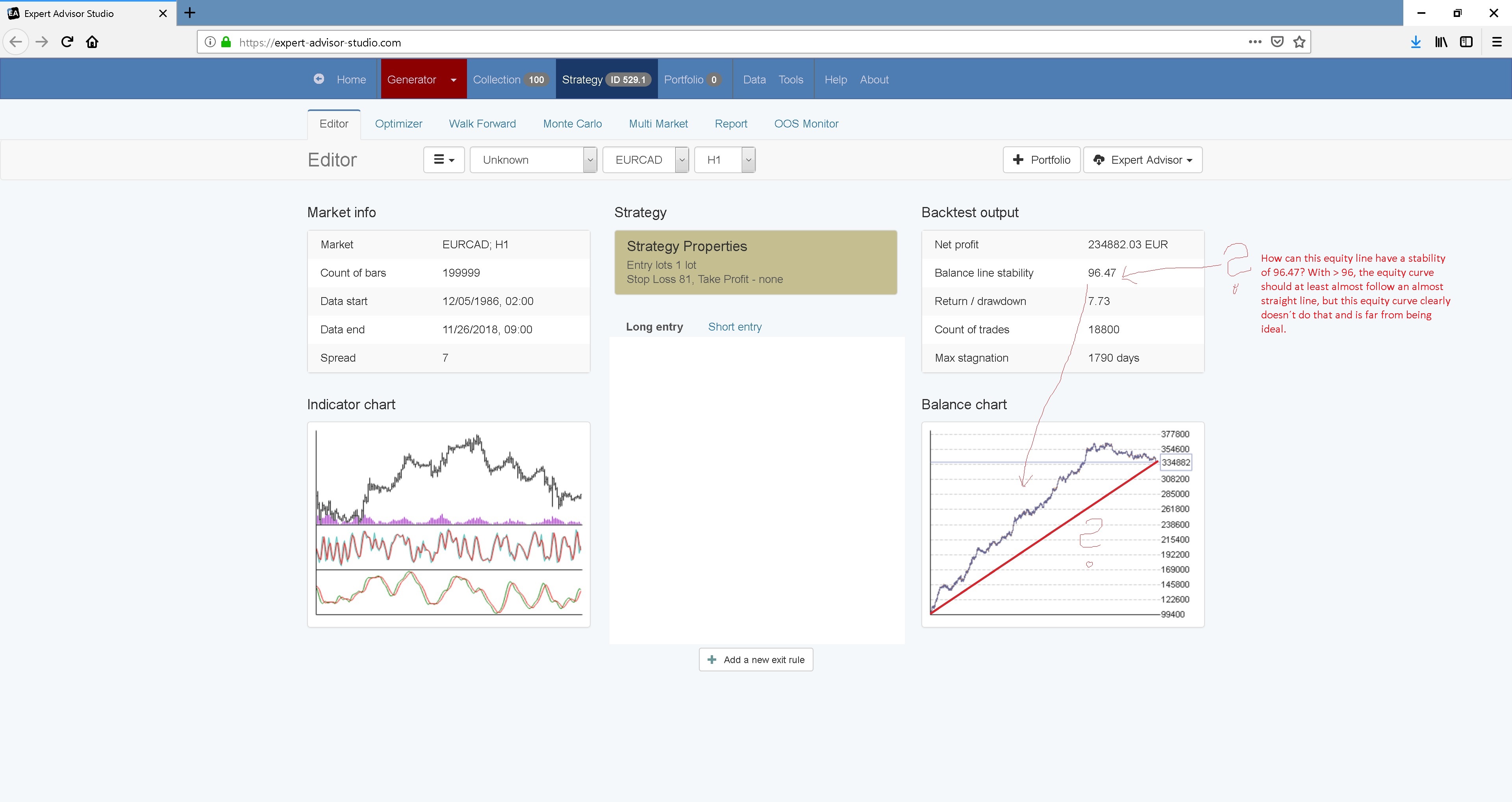 And this equity curve is even worse, yet has an even higher stability value: 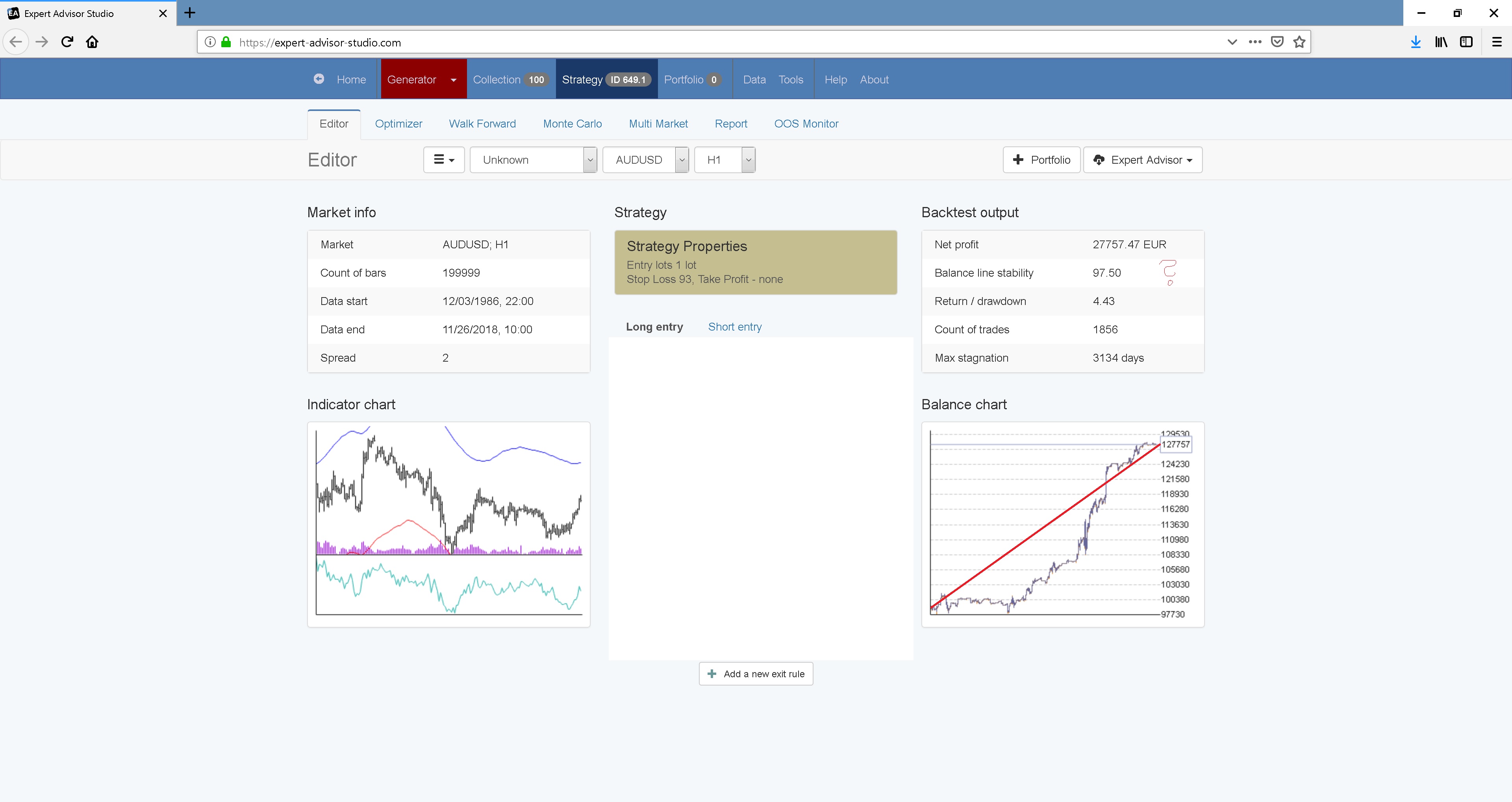 Something must be clearly wrong with the calculation.

P.S.2: On a side note: could you possibly add the "Balance Line Stability" (once it works correctly) as an Optimization target? That would be great. Thanks :-)

Im with Geek trader I too have noticed the issue with the line stability, as well as think it would be a great optimisation tool.

Thank you for the reports!

I'm aware of these problems and think for a solution. It looks like that the current formula is too sensitive to the number of bars and to the initial account amount. I have to adjust it to compensate these factors.

Thank you and happy holidays to you too :-)

what about using R-squared and Slope the same way as in MT4Tracker..?

Yea, R-squared would be the solution, I´ve sent him a formula already that uses that.

For example: if I load one of my old settings files, it replaced "Max Stagnation %" with "Minimum average HPR %" in the acceptance criteria, because you´ve changed the list/order of the list. For me, it´s no problem to correct this, but not all users might notice that and you might want to add something so that even old settings files will load the correct previously used acceptance criteria.