In this article, I'll focus on the long strangles. They could be structured via plain vanilla or binary options. In general, your choice depends on the size of the price move you expect. When trading volatility with hourly binary ladders I use a structure that I call the double strangle. This is a combination of a strangle with wider strikes and another one with strikes closer to the current market price. The purpose of the second strangle is to cover the costs of the first one if the price doesn't move much. I trade the double strangle only when the volatility is low and the strikes of the second strangle are close enough to the current market. On the chart below you can see what will be the P&L at the expiry. 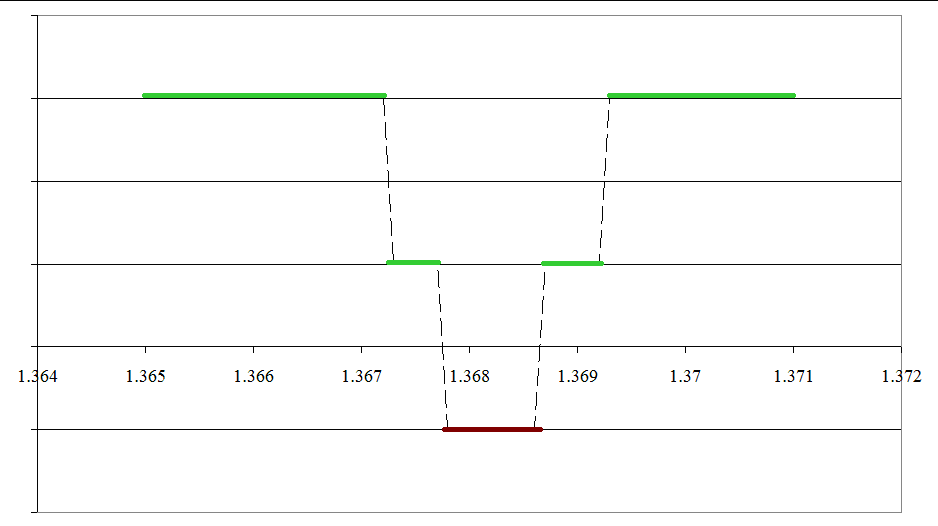 I will show you with two examples of the last week how I use the double strangles. In the first case, the calls were with strikes 1.3687 and 1.3692, while the puts were with strikes 1.3677 and 1.3672 for a total cost of 49 points. The expiry was at 9 AM London time. I needed the price to move 6 pips in either direction the last 12 minutes of the first hour after the biggest FX center opened. The range so far was 10 pips, while it is 25 pips on average. The market closed less then a pip above the lower strike, but the higher one was in-the-money and its payout (100 points) cover all the costs.

In the second example (the chart below), the expiry is at 3PM London time. This period is pretty busy, because NY and London are open at the same time and this is the beginning of the US session. After I had the two strangles (1.3675/1.3705 and 1.3685/1.3700) GBP/USD started to move lower and I decided to add one more put with a strike 1.3690. It would break the symmetry of the structure, but the correlation between GBP and EUR is strong and a move lower of EUR/USD could be expected. Two of the puts expired in-the money.