USD/CAD: the likelihood of a trend change is still low

CAD continues to look strong against the backdrop of the declining USD; however, Friday's labor market data from Canada made analysts question the strength of CAD. The Unemployment Rate in April rose from 7.5% to 8.1%, showing the most significant deterioration since March 2020. The Net Change in Employment decreased by 207.1K, which turned out to be much worse than the expected decline by 175.0K. Participation Rate fell to 64.9% from 65.2%.

The USD/CAD pair did not change the trend only due to the fact that the situation on the US labor market turned out to be even worse. The Unemployment Rate in April rose from 6.0% to 6.1%. In turn, the employment rate fell in almost all sectors. The number of jobs in the manufacturing industry decreased by 18K, with a projected increase of 55K, and the number of Nonfarm Payrolls increased by 266K, with an expected increase of 978K. Thus, the target indicators for employment were again not reached, so raising interest rates by the US Fed is out of the question.

On the daily chart, the price continues to form a global descending channel. Technical indicators are in a state of sale: the range of EMA fluctuations on the Alligator indicator continues to expand, and the histogram of the AO oscillator is trading in the sales zone. 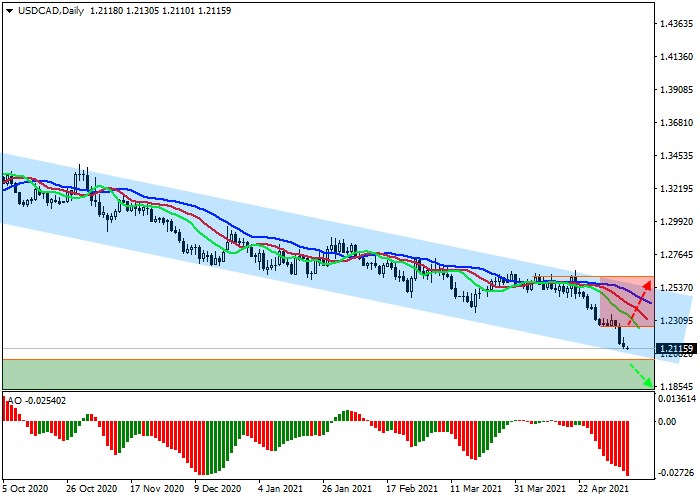 The prices for benchmark Brent crude oil continue their correctional movement, trading around $68.30 per barrel. The quotes stopped their global growth and consolidated within a comfortable range.

Investors are monitoring the situation in Asia, where a new outbreak of the coronavirus pandemic has been recorded. It is still unknown to what extent this situation may affect demand. OPEC is to publish its monthly report today and the situation may become clearer. Also, the US Department of Energy will present its short-term outlook on the energy market, and traders will be able to assess the impact of recent cyberattacks on the US fuel infrastructure.

As for the situation in the global arbitrage position of the spread between Brent Crude Oil and WTI Crude Oil, then everything is quite calm, and the price difference has been kept in the range of $3.5–4 for a long time, which indicates the reluctance of large players to do something. Global investors are satisfied with the current quotes of the asset and the stable range of weekly volatility of 4–6%.

Locally, the asset is growing smoothly within a fairly wide channel. Technical indicators are in a state of uncertainty: fast EMAs of the Alligator indicator intertwined with the signal line and the histogram of the AO oscillator trades close to the transition level. 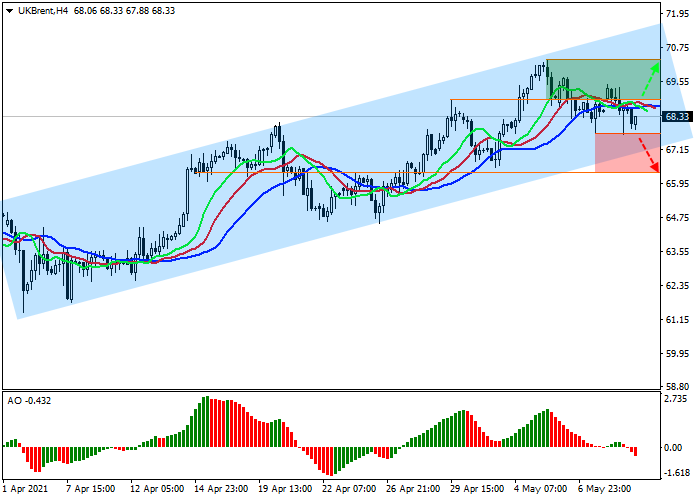 On the daily chart, the fifth wave of the higher level (5) develops, within which the wave 3 of (5) forms. Now, the first wave of the lower level i of 3 has developed, and a local correction is forming as the wave ii of 3. If the assumption is correct, after the end of the correction, the price will grow to the levels of 450.00–500.00. In this scenario, critical stop loss level is 313.00. 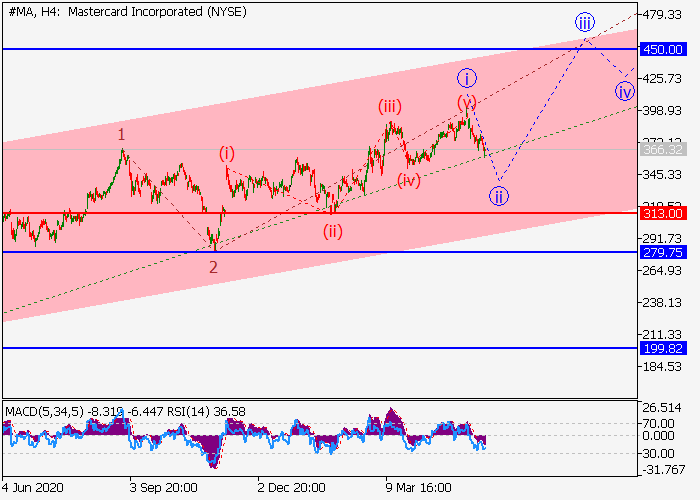 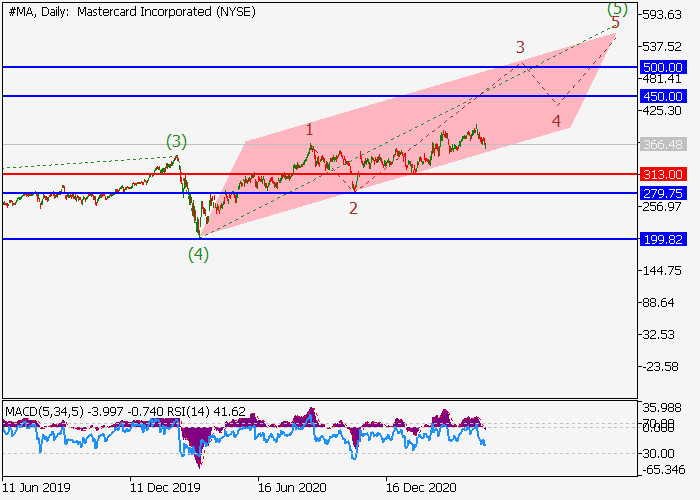 Silver contract price is correcting downwards, trading at 27.00 and continuing to trade in a global uptrend.

Investors watched the auction for the placement of 10-year US Treasuries at a rate of 1.684%. Such high yield has a negative effect on the price of silver and gold, but it could not exceed the psychological level of 1.700%, which gives hope for a slowdown in the growth of the debt market.

The XAG/USD pair is supported by a significant increase in inflation in the US, the expectation of which was one of the main reasons for the strengthening of precious metals in April and May. These assets have always been ideal hedging instruments to protect capital from inflationary risks, so higher rates from the US Fed are needed for their growth. Annual inflation in the country accelerated to 2.6%, which means an increased likelihood of an early change in monetary policy by the American regulator.

On the global chart of the asset, the price continues to grow within a narrow ascending channel. Technical indicators maintain the buy signal: the range of EMA fluctuations on the Alligator indicator continues to expand, and the histogram of the AO oscillator is high in the purchase zone. 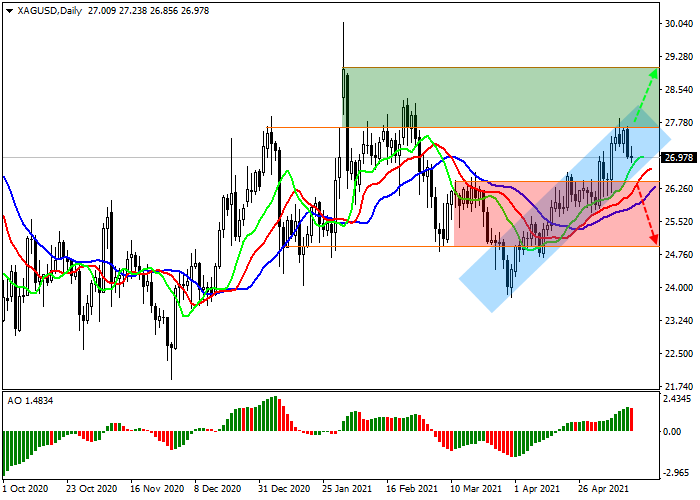 On the daily chart, the first wave of the higher level (1) develops, within which the wave 3 of (1) forms. Now, the third wave of the lower level iii of 3 has formed, and a local correction has ended as the fourth wave iv of 3. If the assumption is correct, the price will grow within the wave v of 3 to the levels of 55.00–57.50. In this scenario, critical stop loss level is 44.71. 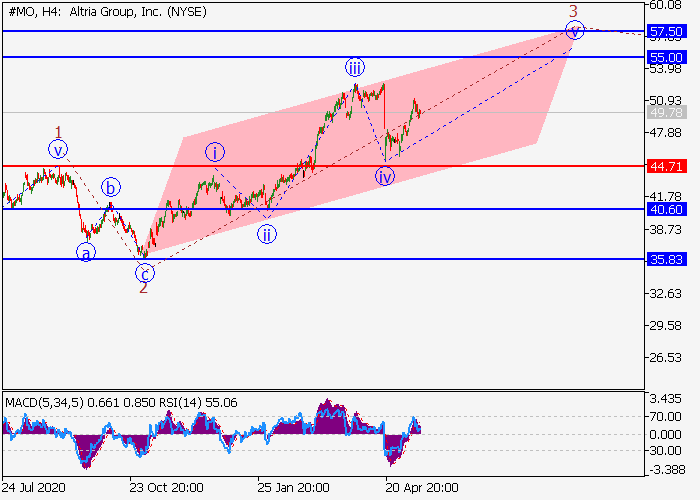 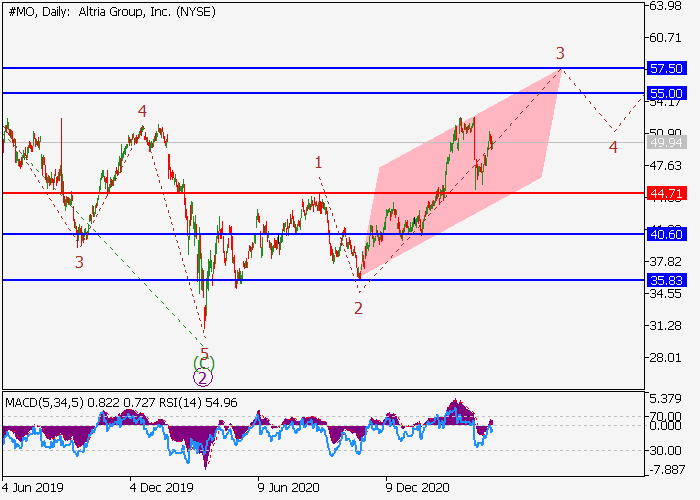 Gold quotes continue corrective growth, trading at $1,855 per ounce. After the lifting of quarantine restrictions, the global demand for metals went up sharply, provoking price growth.

At the moment, industry leaders are beginning to actively recover from the consequences of the pandemic, increasing gold production, which will undoubtedly affect the price of the precious metal. Yesterday, the South African statistics service published data on mining for March this year. According to official data, the figure rose by 21.3%, the growth of platinum ore production was 68.6%, and of gold – 10.5%. However, the volume of sales of the asset rose much higher, at 61.3%.

Thus, the strengthening of world metal production and the current negative trend in the US dollar contribute to the positive dynamics of the instrument.

On the global chart, the price reaches the resistance line of the global downtrend and its breakout will allow the rate to reach 2000.0 by the end of May. Technical indicators keep a global buy signal: the fluctuation range of the Alligator EMA is quite wide, and the histogram of the AO oscillator is trading in the positive zone. 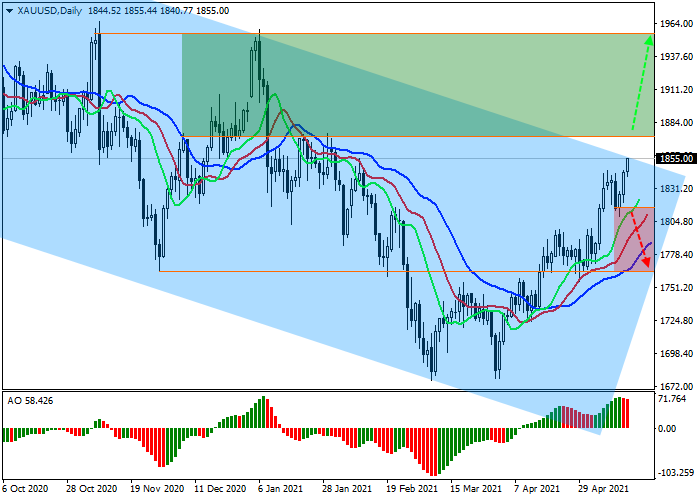 The EUR/USD pair grows, trading around the level if 1.2169 in anticipation of the publication of data on the Q1 EU GDP.

Although the pace of vaccination in the EU countries has accelerated significantly, the economy continues to recover extremely slowly. Analysts expect the indicator to remain unchanged at –1.8% YoY and –0.6% QoQ. Italian consumer prices were released yesterday, rising by 0.4% for April, slightly above 0.3% for March. The harmonized consumer price index for the same period slowed down to 0.9% from 1.8% for March.

USD is trading at rather low volumes in anticipation of the publication of the minutes of the Federal Open Market Committee (FOMC), which will take place tomorrow. Despite the numerous statements by experts that the US Federal Reserve does not need to raise interest rates right now, it has happened more than once that the regulator acted unexpectedly. Investors prefer to wait for hints from the department and are in no hurry to open positions with the American currency.

Locally, the price continues its corrective growth. Technical indicators keep a buy signal: the fluctuation range of the EMA on the Alligator indicator is wide enough, and the histogram of the AO oscillator moves in the buy zone, forming new upward bars. 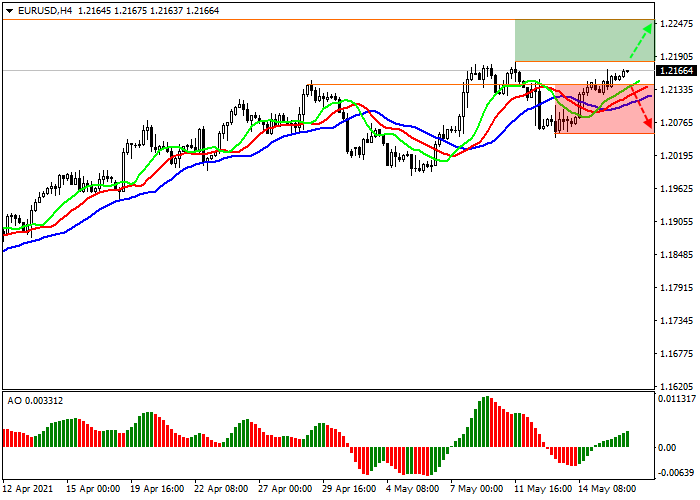 Brent crude prices continue their correctional movement, trading at 68.00 after another attempt to consolidate above the key level of 70.00.

Analysts point to possible significant progress in negotiations between the United States and Iran on the renewal of the nuclear deal. If the parties are able to agree, and the US authorities will not extend the sanctions against Tehran, this will allow Iran to significantly increase the supply of cheap "black gold" to the world market.

Yesterday, the American Petroleum Institute (API) released data on weekly stocks, which increased by 0.620M barrels, which is lower than the expected increase of 1.680M. Today, the Energy Information Administration (EIA) of the US Department of Energy will publish its report, which is predicted to show an increase in reserves of 1.623M barrels. However, if the actual data demonstrate a decrease in the indicator, the local trend in the asset may again change to an uptrend.

On the local chart, the asset continues to trade close to the global high, forming a sideways channel with the boundaries of 70.00–66.50.

Technical indicators are in a state of uncertainty: the fast EMAs of the Alligator indicator are below the signal line, and the histogram of the AO oscillator has moved into the sell zone, forming the first bar below the zero level. 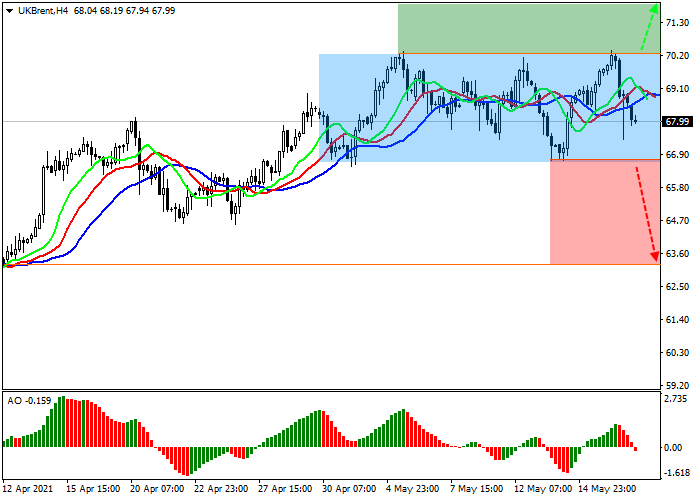 NZD/USD: the likelihood of a decline in the USD increased

The NZD/USD pair corrects and is currently trading near the level of 0.7181, trying to consolidate within an uptrend.

The latest statistics from New Zealand did not affect the price significantly. Thus, the Q1 producer purchase price index increased by 2.1%, while a quarter earlier the growth was only 0.1%. The selling price index increased by 1.2%, which was higher than the previous value of 0.5%. The Reserve Bank of New Zealand's net debt may fall to 34.00%, up from 39.70% in the last analyst forecast.

Although the publication of the US Federal Reserve Open Market Committee (FOMC) Meeting Minutes did not give clear hints of further actions of the regulator on monetary policy, the statements of several officials forced investors and analysts to take even more seriously a possible change of course at the next meetings. Inflation is accelerating and the authorities need to take measures to contain it. The debt market reacted sharply to the increased likelihood of rate hikes. The yield on the key 10-year US Treasuries reached 1.680%, while yesterday morning it was 1.641%. An increase in yield is a negative signal for USD, which is now on the verge of a new cycle of decline.

The price moves within the local upward correction. Technical indicators keep a poor buy signal: fast EMAs on the Alligator indicator are above the signal line, and the AO oscillator histogram is in the buy zone. 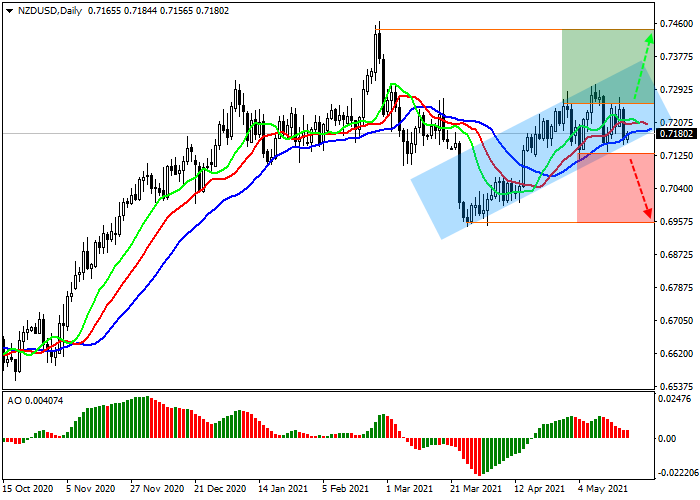 The USD/JPY pair is correcting around the level of 108.71.

The Japanese currency began to rally after the country's Ministry of Health announced approval for the use of two vaccines: from the companies Moderna and AstraZeneca. According to the Ministry of Health, the Moderna vaccine will begin to be used as early as May 24 but the use of the AstraZeneca vaccine has been postponed for now. Also, the instrument is positively influenced by macroeconomic statistics. Japan's nationwide core consumer price index for April was –0.1% YoY, better than analysts’ expectations of –0.2%. The consumer price index reached –0.4%, while the Service PMI is at the level of 45.7 points.

The key data for the American currency was an unexpected reduction in the number of Initial Jobless Claims, amounting to 444K, which is less than the expected 450K. The average number of applications over the past 4 weeks also decreased to 504.75K against 535.25K a week earlier. However, the positive was short-lived, and data on the manufacturing activity index from the Federal Reserve Bank of Philadelphia for May stopped the upward trend. The indicator dropped to 31.5 points from 50.2 points a month earlier.

The instrument moves within an upward corrective trend, forming an upward channel, which can subsequently transform into a Flag pattern. Technical indicators are in a state of uncertainty: fast EMAs on the Alligator indicator almost crossed with the signal line, and the histogram of the AO oscillator approached the transition level. 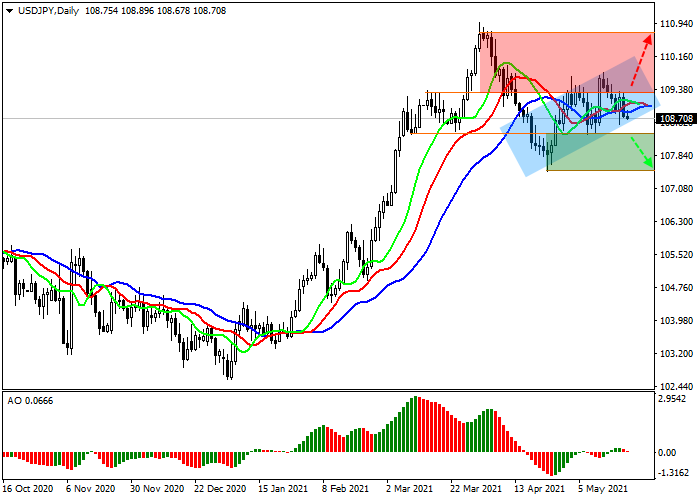